We have had a bird hide planned for many years now and the project has started, stopped, forgotten about for a while and then finally we have had new inspiration and the wonderful assistance from a volunteer to get the project on the go again…. Daniel from the Netherlands was kind enough to travel all that way to spend 10days on our isle and start making sense of previous plans that only existed in a locals heads, nowhere near a paper plan! Despite the lack of a plan, location and the challenge of using natural materials, Daniel made a fantastic start on the foundations. Daniel has made a strong  stone foundation edge that will hold a wooden structure eventually… and started to lay smaller stones for the floor. His hopes are on his departure that we will now continue with the stone work floor and complete some digging required to one side. Hopefully next week the now smaller team of volunteers will continue from where Daniel left off. Once the volunteer group has finished what we can do, it will be then be passed on to a local who will complete the wooden structure.  For now this is where we are at… 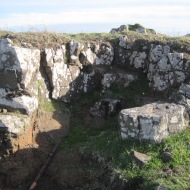 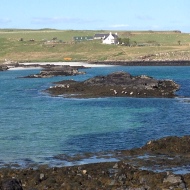 I can’t believe three weeks have gone by so soooo fast!! A lot of those days we have been on the bramble attack in many different locations to keep things a little different every day!! We also had a fair bit of scorching sunshine to contend with on some days and then the last week, so much rain that drying gloves for the next day became a bit of an issue. One volunteer, not mentioning any names, became rather attached to the rake and had zen gardens (a sign of how dry it was) raked into the road on the final clear up of each day!

Here is day 1 and my favourite photos of one location, Team Bramble… 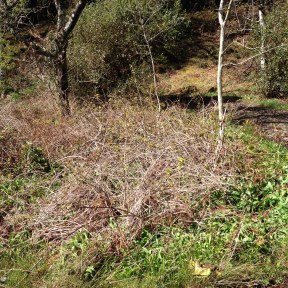 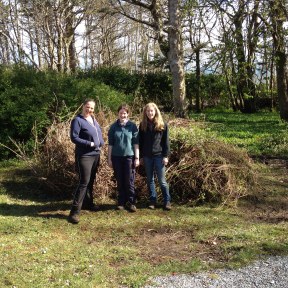 We then set about a fuchsia bush that had got out of hand, or, we got out of hand with it, unsure which way round it was! We did start just trimming it back but it slowly revealed a mad maze of branches and cutting it back completely seemed to be the best option for healthier regrowth. Our wee Robin pal has kept us company, inspected works and no worm was spared! 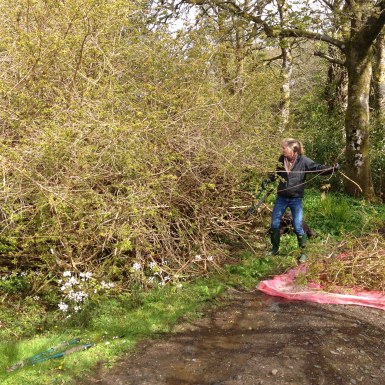 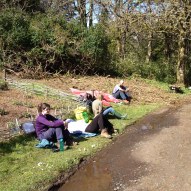 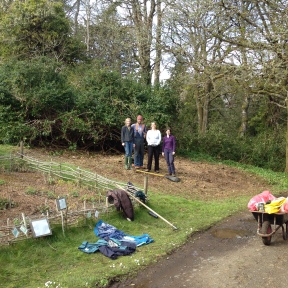 Weeding was carried out on the herb garden, along with refreshment of the markers.

Revamp to the Old Shop Museum and Swap shop with a bit of paint scraping, which was surprisingly difficult on corrugated iron… then a repaint to give it a little sprucing up. This was the thickest paint in the world and we were even able to complete painting when the rain came on in the afternoon. Never mind singing in the rain… then we helped Camille inside the Old Shop Museum cleaning and redoing some of the display items including fixing a whale. Along with the random tasks for that day we had an unusual visitor help us out, good old Winnie the Pooh! If only I had had prior warning so I could have got a pot of honey for him as way of thanks! 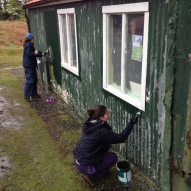 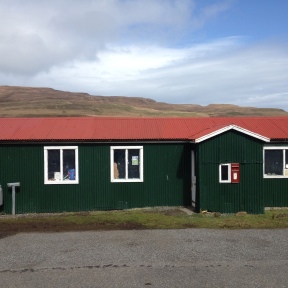 Other days we spent clearing back one of the forestry tracks from overgrowth, brambles from the roadside giving the delightful bluebells a chance to breath and show off their intense colour, dead heading hydrangea’s and not forgetting some beach cleans! 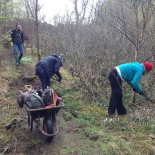 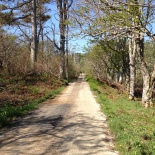 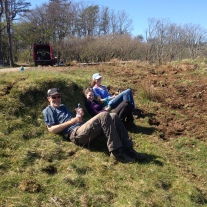 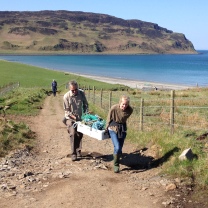 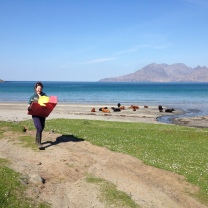 We went from this…

Very eratic weathers, thermals off, thermals on, you never know what your meant to be taking to work sun cream or ski’s!! Despite some crazy weather we have managed to get quite a bit done this last week we did some roadside pruning to the Snow Berry, in hindsite I think that must have been a bit like a rain dance but a snow dance intead!! 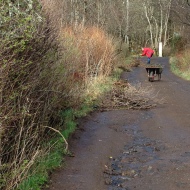 We worked on pruning along the roadside going up towards the community hall for two days. Then on Wednesday we headed to the forestry to complete the replacement spirals and canes to the wind and cow damaged trees and did a bramble attack on a seperate newer tree site. To then find we were snowed off work on Thursday!! Then it was Croft Day Friday, all in all a varied week of weather and tasks!!