We moved on to bashing Rhody’s next, not that fun a job but highly satisfying! We pulled small new shoots and did our best to dig the roots of the larger regrowth. 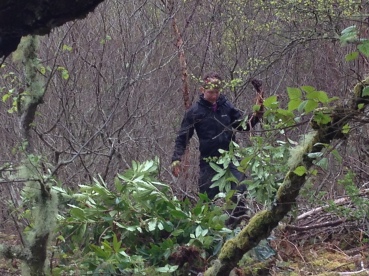 The volunteers then spent the rest of the week resting the weary muscles after severe Rhody bashing and spent a couple of days with Gillian the SWT Ranger doing a butterfly transect, the Wednesday Wildlife Walk and then looking for a curlew’s nest (inconclusive!). They then went on to help out at Earth Connections Centre in the house and out in the garden with a final day for the week spent on a croft.

The following week we worked away on the forestry path and track clearing back brambles, general overgrowth on the path and pulling stray naturally regenerated conifers. we also had a half day clearing brambles from one of the newly planted tree sites. Very pleasant weather and even more enjoyable as pre midge season!

Creation of a new path was up next… with the help of Dean we took a route from just before going into Galmisdale field with a path that leads you from open woods, to a mossy fairyland, to bluebell paradise! The first part of the path was simple and straight forward, however the steepness of the bank (pictures below) myself and Dean had remembered quite differently when we planned it out last year! Everyone took the challenge and started digging a zigzag path to begin with, adding in steps here and there… sometimes you can’t forward plan you just have to start and then decide the next stage when you get there! 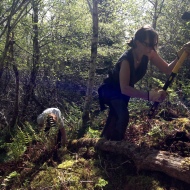 We took some time out of the path after some intense planning, digging and logistics for a more peaceful time on the hillside on our Shorewatch site. Eigg  is part of the 32 sites around Scotland that is a recognised site by the Whale and Dolphin Conservation (WDC) that volunteers keep data from regular watches for Whales, Dolphins and porpoises. Not many people know that Scotland is one of the best places for land-based whale and dolphin watching in Europe! It was training day for some new, on and off island volunteers, what a perfect day to sit out on the hill. Unfortunately we didn’t see anything this day. But then the more you watch….you may just see…… 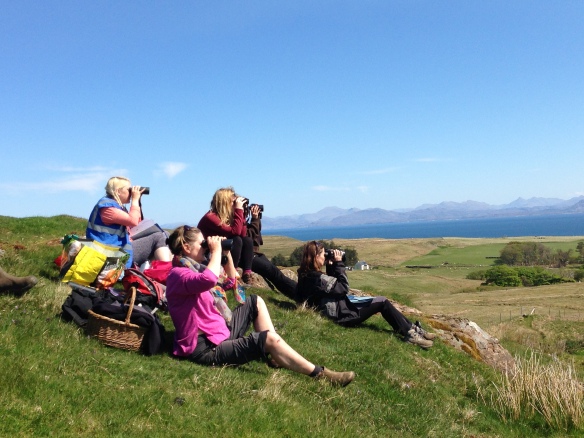 The volunteer season has swung into action at extraordinary speeds… it felt only a few days ago the family were gathering around the table for Christmas dinner!

Anyhow, April saw the first enthusiastic volunteers arrive and the amount of tasks that have been achieved since then has been, perhaps record breaking! The first week we, ‘attacked’, (is the only word you can use to describe the work) as we started cutting back and taking charge of one of many Escalonia hedges that have been left to go out of control in the Lodge gardens. They have been good for the birds to hide and nest, along with the kids have had much fun running through the tunnels on each side or jumping on the top as a giant trampoline (I have received an official complaint from the kids about cutting the hedge!). It does look rather severe but it does grow back and will look much healthier for it, it just might not be that good as tunnels or a trampoline for many years though…. well done to these three ladies that took on the challenge as it was by far an easy task and all by hand, no chainsaws to be seen! 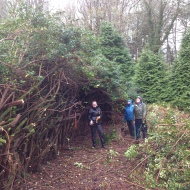 Day one and we didn’t know our own strength! Even with the rain it didn’t seem to dampen the enthusiasm. 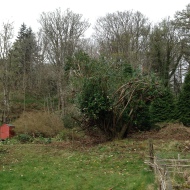 Day two was as if we were working in slow motion and none of us believed how much we managed to do on day one. I don’t think I took any pictures from day two as the progress seemed so slow! But day three we were cracking on again, although by the end it did look I had maybe killed off a couple of volunteers as they weren’t looking to enthusiastic after a break! But then we were perked up by a visit from out wee Robin pal…until it had a wee poo on Stef’s leg! 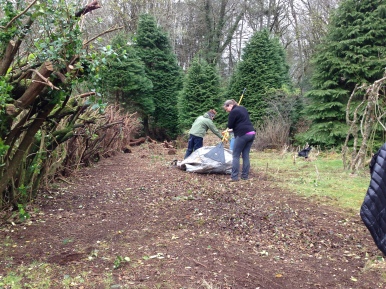 Just as we were loosing the will to hedge any longer, we got done at last! The tidy up takes as long as anything. At this point we could then really appreciate the amount of work we had done and  how much of the field on either side of the hedge we have gained. For a final day before two of the girls departed we had a gentle days tidying the roadside from the hall towards the pier clearing brambles and anything else that required to come out. This is when we found the wee fern coils uncurling, a very vibrant colour. If we hadn’t been sprachling around we would have missed this moment of natures beauty! 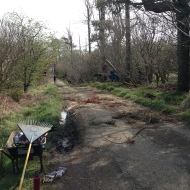 We then moved on to making a new flower bed, weeding the Herb Garden, we even managed to draft in the assistance of our new Scottish Wildlife Trust Ranger, Gillian for part of the day! Off we then went to finish off the roadside clearing down to the pier. Then we were treated to an very impromptu bit of craic on a lunch break! Imagine, small pipes, cello and spoons with a variety of tunes and styles being played and Charlie taxi finally got a rendition of the Game of Thrones theme tune! The most unexpected things happen on a lunch break some days!!